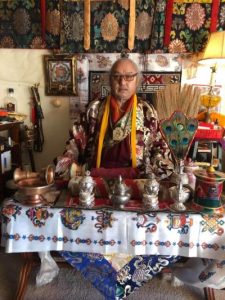 Lama Jigme Rinpoche is an authentic Vajra Lineage Holder and Master of the Dzogchen Longchen Nyingtik tradition of the Nyingma sect of Tibetan Buddhism. He has the wish of spreading the Buddha’s teachings to Westerners. He is unique in that he is received all his training in the traditional style from Tibet. Rinpoche is not only a fully trained Lama but is also a Tulku (or reincarnated Lama). He began his training at the age of five with his root gurus Rigdzin Jigme (from Tso-ngon, Tibet) and Aku Sherab (from Rikon, Tibet).

Rinpoche was born in Tso-Ngon Po Tso-shar Ba-nyen, Amdo, Tibet in 1956 at the beginning of China’s cultural revolution in Tibet. His parents were his father Sonam Rinchen and his mother Rinzin Dolma, his grandfather was also a great practitioner who often dwelled in caves. At the time of Rinpoche’s birth, his parents were told by an oracle that his birth name was Phagmo Tsetam (relating to Vajrayogini). They were also told that he was a reincarnated lama (or Tulku) and that they should keep this a secret or there would be danger and there would be problems with his lifeline. At the age of three, strangers started coming from afar and started telling people in the village that Rinpoche was a Tulku. Rinpoche’s father and grandfather denied this news knowing that it was not good for it to spread. However, because of this, the oracle’s prediction came true and Rinpoche fell very ill. He had serious problems with his health including his left ear and it was difficult for him to walk. It was advised that Rinpoche receive a special healing prayer with holy water for purification of illness and obscurations.

At the age of five, Rinpoche’s father and grandfather secretly brought him to his root guru Rigdzin Jigme. Rigdzin Jigme said to his parents that Rinpoche’s spirit was very special and that he was a exceptional being. From this point on Rigdzin Jigme raised Rinpoche like his own child, he fulfilled all his needs and gave him the precious teachings, empowerments, transmissions and pith instructions from his lineage of the Dzogchen Longchen Nyingtik until Rinpoche turned seventeen.

At the age of seventeen, Rigdzin Jigme told Rinpoche that he should do a cave retreat for five years on The Three Roots (The Lama, Yidam, and Dakini). After the retreat he received the teachings of “Instructions of Mind”. When Rinpoche was twenty-one during The Tibetan New Year it was a very special day. Not only was it the Tibetan New Year (Losar), it was also the 10th of the full moon, and the auspicious day of Guru Rinpoche. At this time Rigdzin Jigme told Rinpoche to sit on his throne in order to create good circumstances and fortune for him to sit and give teachings in the future to his own students. Rigdzin Jigme also gave him his new Dharma name of Jigme Namgyal and said that he can go home to his village and get married as a Ngakpa, but to sometimes visit him.

When Rinpoche was twenty-two he was instructed by Rigdzin Jigme to go to Lama Aku Sherab, who was also a Nyingtik Lineage Holder to check and refresh his knowledge. For three months Aku Sherab checked Rinpoche’s knowledge and also gave empowerments, oral transmissions, and pith instructions on Chod, Phowa (the practice of consciousness transfer to the heaven of Amitabha), Tsalung (Tibetan Yoga) and the nine breathing exercise. After this he was instructed to train at the great Samye Monastery (the first Buddhist monastery in Tibet) for five months where Rigdzin Jigme had friends at the Dzogchen Lhakang section of the monastery.

Then he went to a mountain retreat named Samye Chimbu for one year and six months to practice Hayagriva. At Samye Chimbu Rinpoche met a Kham Minyak Lam with whom he studied Tibetan Medicine, astrology and additional Tsalung breathing exercises. In a duration of about two years afterwards, Rinpoche left for Dharamshala, India. In Dharamshala Rinpoche spent two years and eight months in heavy practice on Kagye (The Eight Great Sadhana Teachings). After completing his practice,  five monks from H.H. The Dalai Lama’s Namgyal Monastery came to perform a fire puja to seal Rinpoche’s practice and to purify any mistakes he might have made during practice.

After his practice Rinpoche met with H.H. The Dalai Lama and was interviewed extensively with many questions. His Holiness was delighted by his answers and personally entrusted Rinpoche with a very old and blessed phurba (ritual dagger). It was also at this time that the Dalai Lama gave Rinpoche an opportunity to lead and build a monastery in Dharamshala. This was a very rare opportunity, not all the great masters who came from Tibet had the chance to do such things. After the completion of the Padma Rigdzin Ling monastery Rinpoche invited the Dalai Lama to visit. His Holiness told Rinpoche that he had the realization of great compassion without effort, but he still had to practice refuge and aspiration prayers thoroughly. 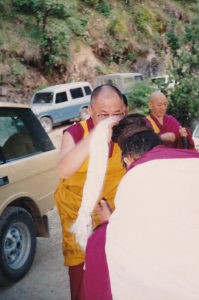 Letter from H.H. The Dalai Lama’s office saying that Rinpoche is the new owner of an ancient phurba (ritual dagger). 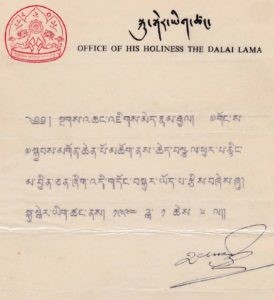 An ancient phurba (ritual dagger) given personally to Rinpoche by H.H. The Dalai Lama. 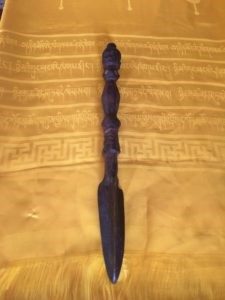 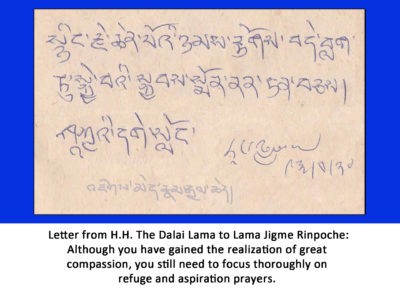 From this point on from 1993 to 1998 Rinpoche was the spiritual leader of Padma Rigdzin Ling and served as Abbot on behalf of the Dalai Lama. His Holiness had Rinpoche personally perform and lead many practices and ceremonies in Dharamshala. Rinpoche also made a trip to Nepal and received the transmission of Rinchen Terdzo (The Great Treasury of Precious Dharmas) from H.H. Penor Rinpoche and Shechen Rabjam. To receive all the empowerments and transmissions for Rinchen Terdzo can take between four to six months. 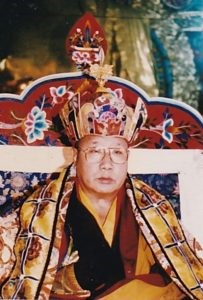 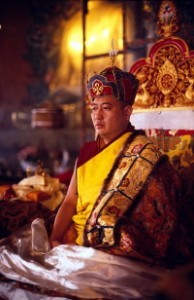 In 1999 Rinpoche made his first trip to the United States in Reno, Nevada with the help of his student Professor Herb LaGue. They also went to Hawaii for 3 months for sightseeing. In 2002 Rinpoche again came to America at Coeur d’Alene, Idaho where he stayed and in 2004 his wife and children came as well with the help of his students Carmen and Chris Barnbeck. Rinpoche then spent two years traveling around with his translator Esteban giving Dharma teachings to various places, including a prison to help spread the teachings to Westerners.

Then Rinpoche finally settled in Las Vegas and began offering teachings. Anyone looking for esoteric Vajrayana Buddhism can contact Rinpoche for lessons or services. 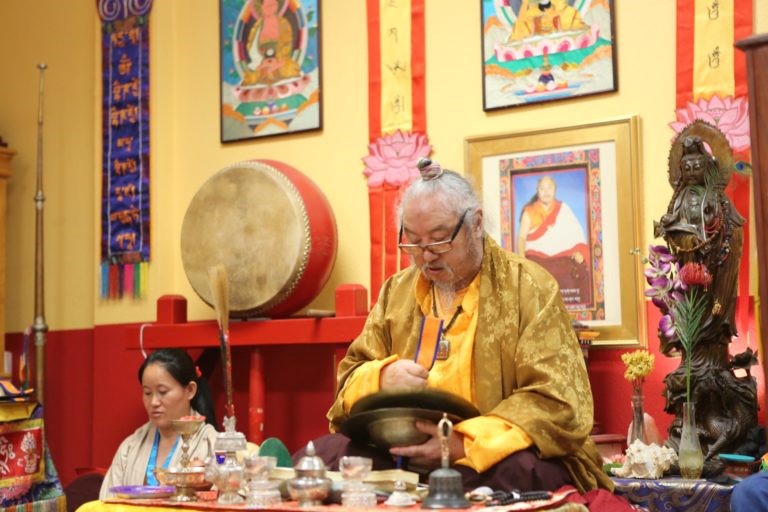 Lama Jigme is not just a name, it means that he is a spiritual teacher and also has the title of Tulku and Lama both. In general when students receive teachings from any spiritual master it is very important to have pure perception and devotion. If people come to Dharma teachings just for fun and have no devotion, not only will they get any benefits, but they can actually create obstacles for themselves. When the master is authentic and qualified, and the right student fulfills his role, then it is easier to get close to enlightenment.

(Rinpoche received empowerments from Dilgo Khyentse Rinpoche in Lhasa, Bodhgaya, and in Dharamshala.) 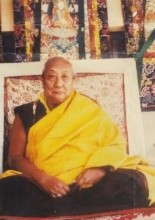 Rinpoche’s certification that he is Abbot of Padma Rigdzin Ling (The Temple of the Lotus Awareness Holders). 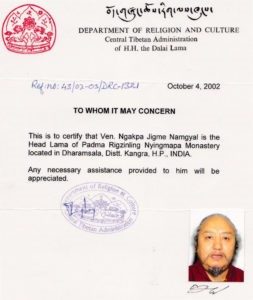 This is the short biography of Lama Jigme Namgyal Rinpoche, this is not an official biography of Rinpoche but it is something to help inform his students about his life. If anything was incorrect then we give our apologies. 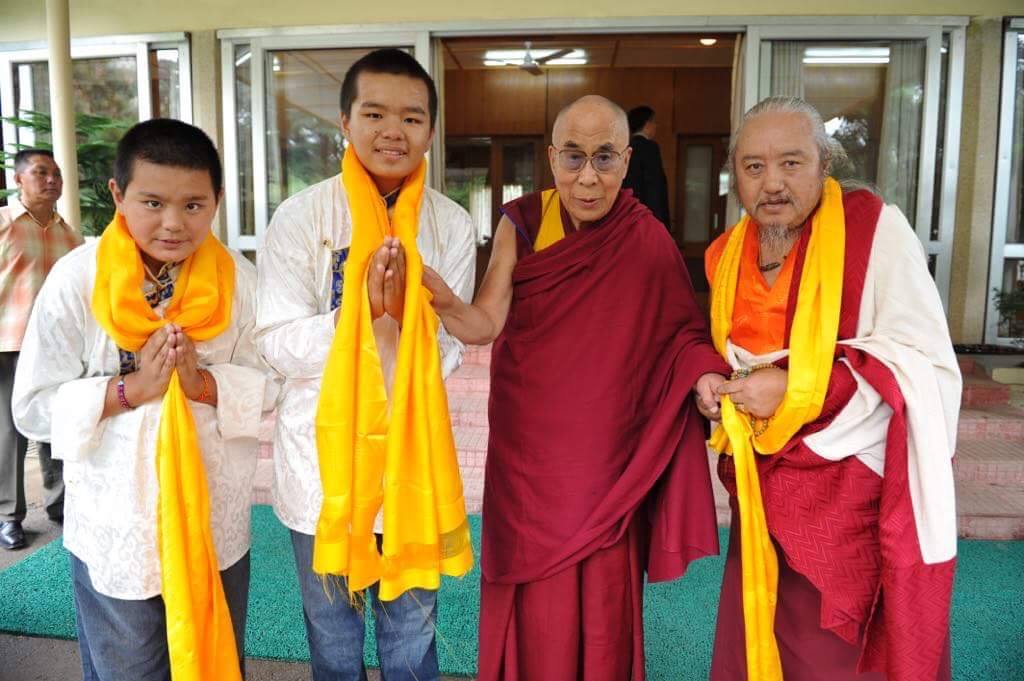 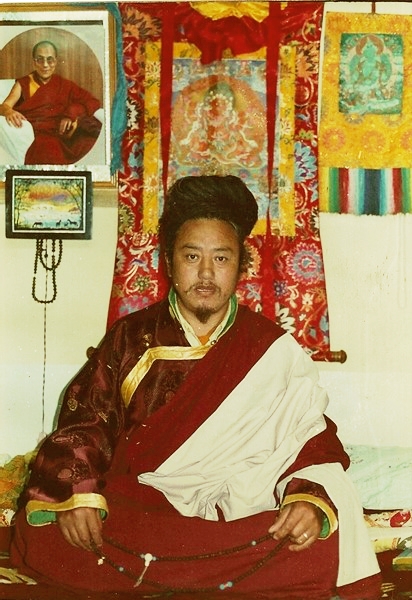 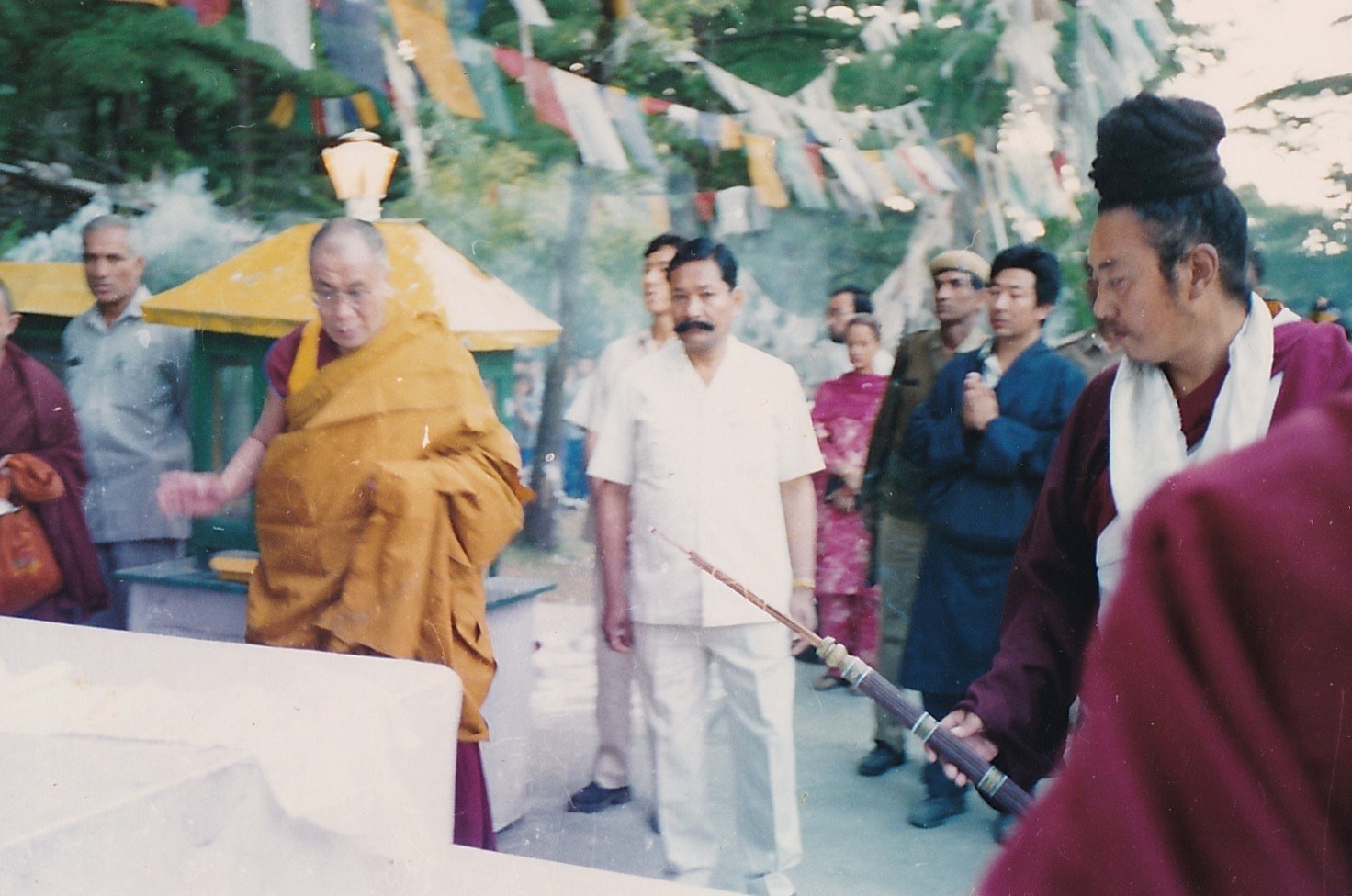 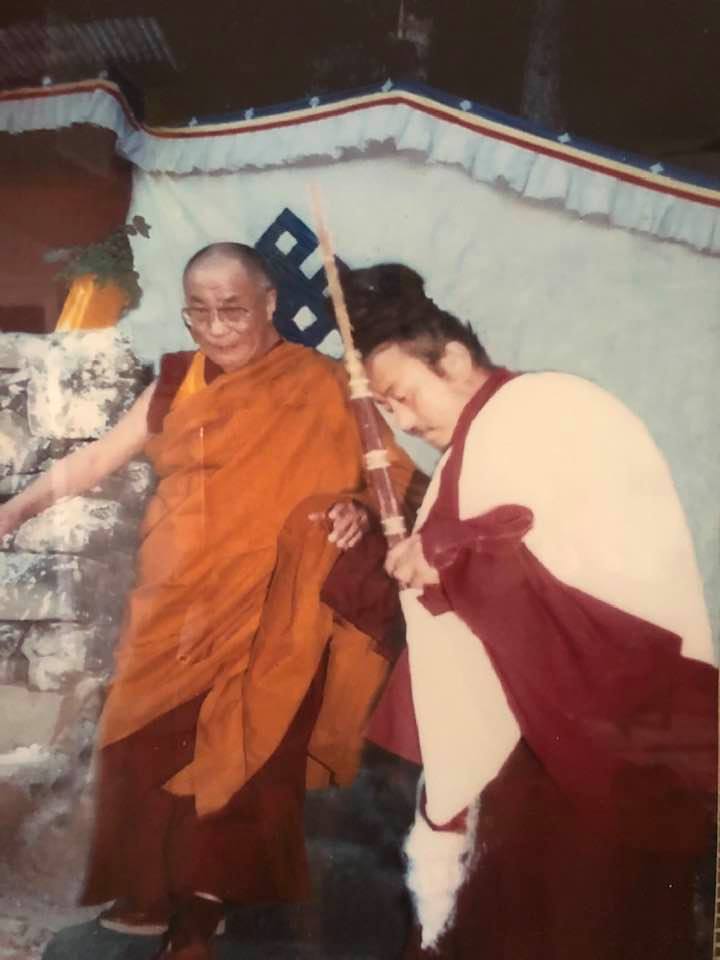 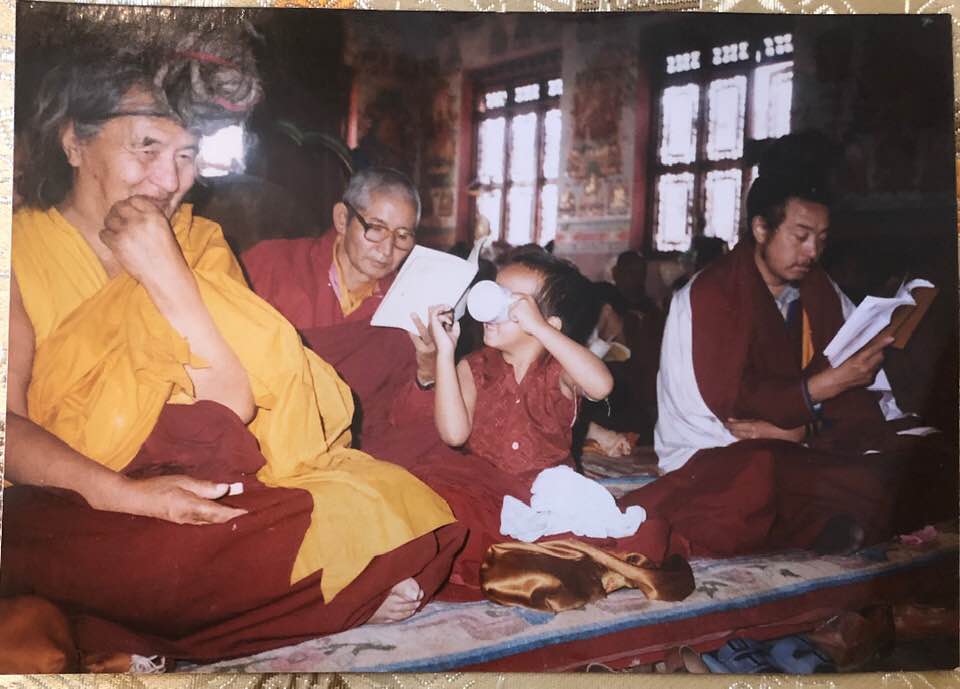 (In Dharmasala, seated next to H.E. Drubwang Konchok Norbu Rinpoche.) 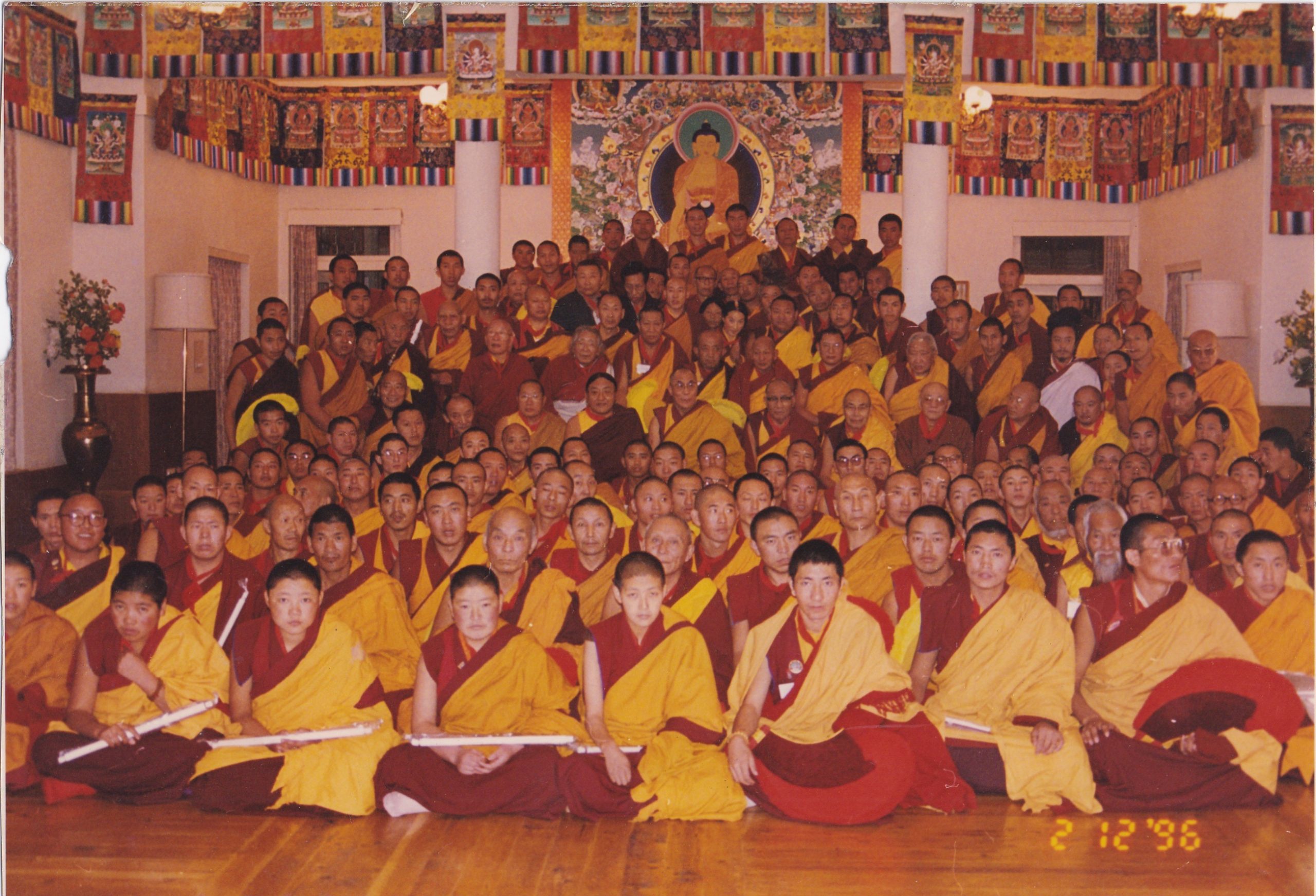 (His Holiness the Fourth Dodrupchen giving a long-life blessing to Lama Jigme Rinpoche.) 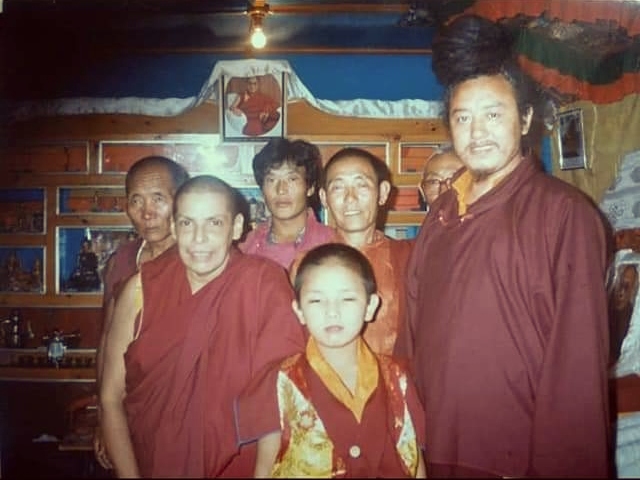 (Part of Rinpoche’s Sangha in Dharmasala for some time, picture taken inside Padma Rigdzin Ling.) 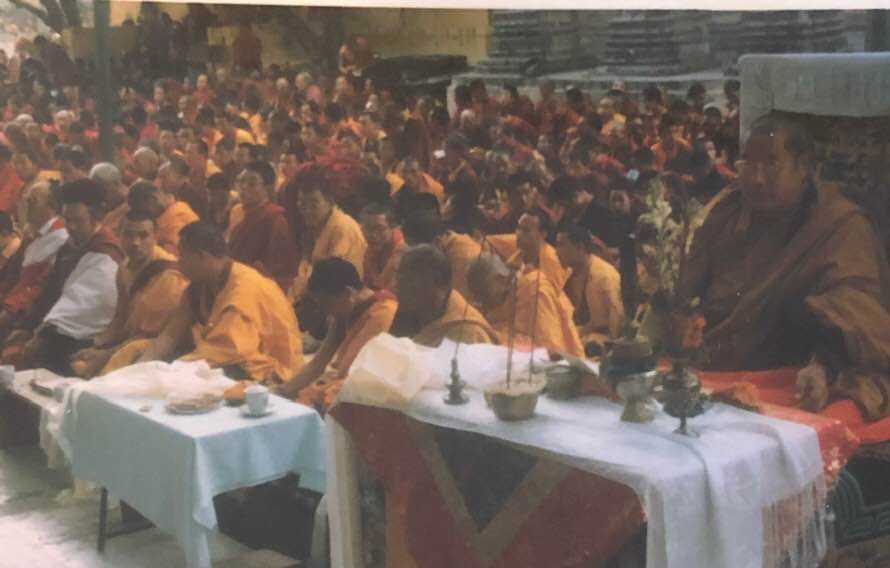 (In an assembly with Penor Rinpoche, Lama Jigme is on the far left in white shawl.)