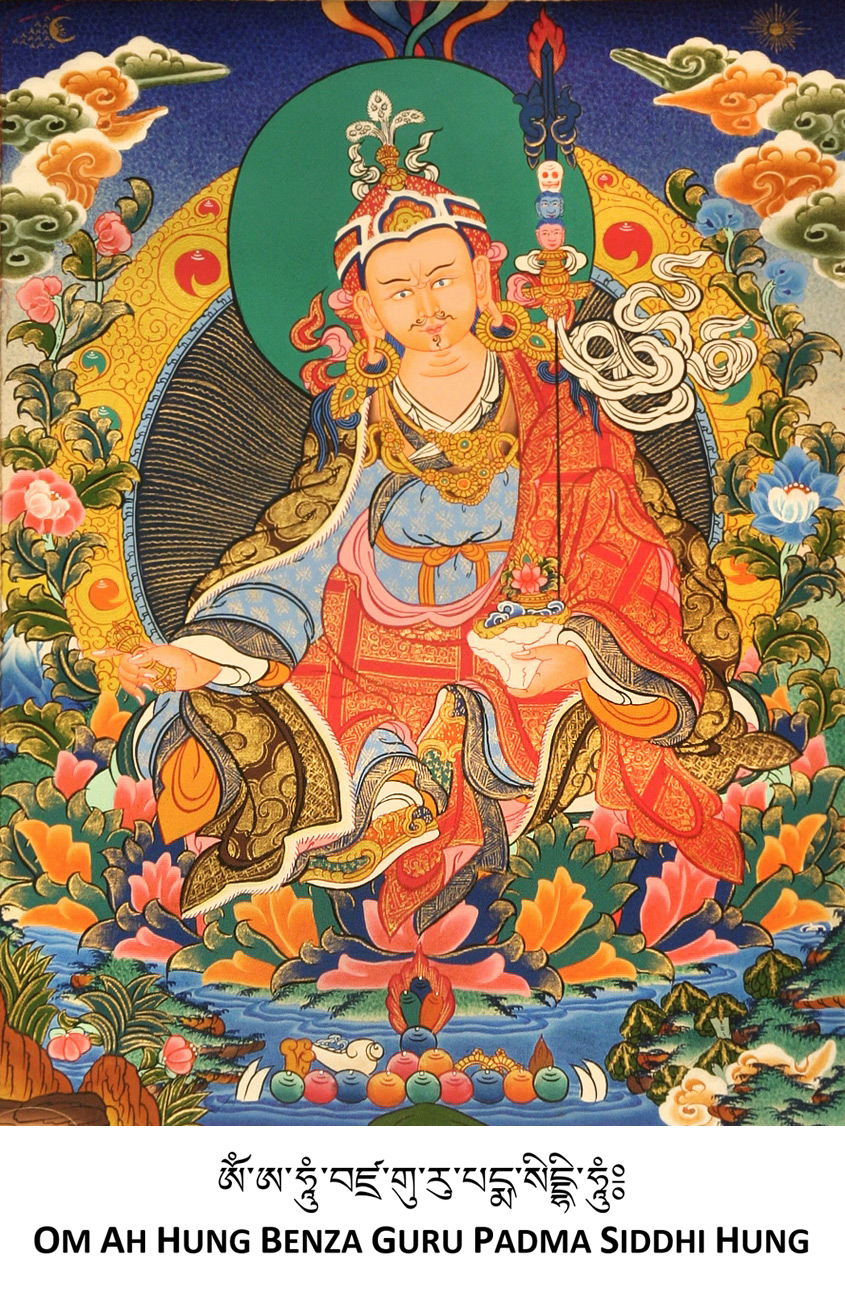 Recorded by Pema Tsering on 22 Aug 2007 with due respect

May 2006 – In the holy land of Padmasambhava, Bhutan, a blind accomplished master knew his time of his death in advance and sat in crossed vajra posture while passing into parinirvana.

As the author was afraid of gradually forgetting the details of this master’s liberation story over the passage of time, the sublime details of it were committed to paper with one’s own inadequate literary skills.  It is hoped that all those who see, hear or are acquainted with the facts of this history will be filled with deep faith and devotion to Padmasambhava, thereby receiving blessings and accomplishments.

This accomplished master “Benza Guru Drubtop”, whose external appearance was dirty and unkempt but who, internally, was extraordinarily free and liberated, was previously a visually handicapped beggar who lived in the peripheral slums of Bhutan.

Later, due to the help of Urgyen Lama  (of Sangngak Thegchog Osel Ling Monastery) and Jamyang Dorje Rinpoche, this accomplished master who had went through a difficult life (but with equanimity) was invited  to the monastery where they looked after him as a offering to a most unsurpassed field of merit.  This was the reason that the last 10 years of his life was relatively peaceful and safe.

“Benza Guru Druptop” was not born blind. It is said that his visual impairment was the result of curses wrought by mantras which his enemies had inflicted upon him.  Before he went blind, he was just a common farmer who belonged to the Bon religion.  At that time, the farmer did not understand the vast qualities of Padmasambhava and had even entertained sacrilegious views towards Guru Rinpoche and slandered him with negative speech.

Finally, he listened to some masters’ advice and decided to start reciting the Vajra Guru mantra (OM AH HUNG BENZA GURU PADMA SIDDHI HUNG), relying on it as his sole practice, and eventually he went on to achieve an astounding level of realization.

When “Drubtop” started to recite the Vajra Guru mantra,  his faith in Padmasambhava began to ripen and increase.  Due to his blindness, day or night was not much difference to him and he began to recite the mantra diligently day and night without distinction.

When he completed a hundred million recitations, “Drubtop”s prayer-wheel, which he rotated as he recited the mantra, began to drip inconceivable nectar. It is well known that prayer-wheels contain dry paper rolls and it is impossible for water to drip from it out of thin air, yet his prayer-wheel began to manifest such a strange phenomenon.  This demonstrated the authenticity of the results of “Benza Guru Drubtop”s practice and also showed how wonderful Padmasambhava’s blessings were.  After that, he did not slow down, but instead continued to recite the mantra diligently, praying to Guru Rinpoche with great faith.

When “Benza Guru Drubtop” had completed the mantra 300 million times, in a dream-like state, he personally met the Lotus-Born Guru and received a prophecy, thereby attaining an inconceivable level of realization.

Padmasambhava told “Benza Guru Drubtop”, “If you live on for 7 more years, your eyesight will be recovered.  The reason for you having lost sight in both eyes is that you previously believed in the Bon religion and especially, you had disparaged and despised (noble beings), causing confused inter-dependent phenomenon to arise.  Now although you have seen me, due to that karmic obscuration, you will not be able to immediately regain your eyesight.”

Thus “Benza Guru Drubtop” was not able to recover his eyesight even though he had seen the Guru Rinpoche.

In spite of “Benza Guru Drubtop”’s inner realization and his extraordinary clairvoyance due to Guru Rinpoche’s blessings,  due to his external visual handicap, no-one was willing to look after him properly.  Thus he wandered around in the region of “Chim” in Bhutan.  The locals called him “Benza Guru Drubtop”.

“Benza Guru Drubtop” knew of a secret method to reverse obstacles which the Lotus-Born Guru had personally transmitted to him.  It could swiftly remove all heavy illnesses or urgent calamities befalling a person.  This method is special but inelegant.  It required that “Benza Guru Drubtop” make a special kind of torma and recite a short ritual, the specifics of it is only known to himself, and then he must strip naked and while totally nude take the torma to a nearby triple-intersect junction.  This method is quite powerful, all the people for whom the “Drubtop” had performed this ritual, recovered from their problems without exception. 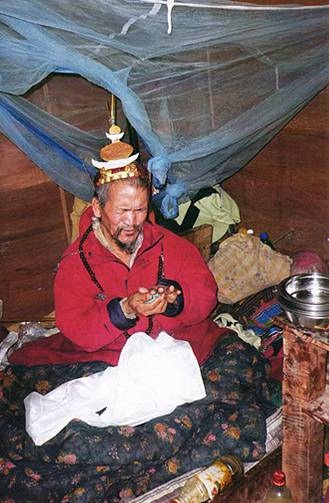 Besides this, every time someone requested the “Benza Guru Drubtop” for any help, his way of divination was also different from others.  He did not need the use of any divination apparatus, nor did he require the person to say much, but would be able to know the intentions of the person and be able to speak out the intimate details of the supplicants’ residence, environment and all other kinds of details, including those personal secrets that the person requesting did not want revealed.  Evidently, the “Benza Guru Drubtop” had attained great clairvoyance of knowing others’ minds due to the blessings of Guru Rinpoche.  He was also widely acknowledged as “Drubtop” due to this.

“Benza Guru Drubtop”’s inner secret realization did not cause him to try to improve his own living conditions but instead he regarded poverty and suffering as not being any obstacle or problem impeding him.

Unlike others, he was not interested in promoting his own diligent efforts at practice or his miraculous responses , instead “Benza Guru Drubtop” benefited beings in a spontaneous and extemporaneous way.  Thus, most of the people who knew him did not know how profound his inner realization was.

Most people only regarded his external style and occasional obstacle-averting rituals as a sign that he was merely a practitioner with some achievements.  Most of his secret conduct and responses, he would only tell to Urgyen Lama and a few close friends who had faith.

Although he was a siddha, he did not alter his clothes or appearance, but remained like a beggar, allowing others to make offerings and making-shift of whatever they offered to wear.  Although he was invited to stay at Sangngak Thegchog Osel Ling Monastery, and could have chosen to have better living premises and conditions, he only preferred to live in a dilapidated corner of the monastery and sleep in his own old covers, using yellowed and hole-ridden blankets and pillow.

“Benza Guru Drubtop” would only accept others’ clothing and food.  If someone offered his cash notes or coins, he will recite mantras and blow on them as a blessing, before returning them to the offerer, telling him not to use the money but to keep it on the body as a blessed artifact for protection.  When one offered him a khata, it was the same case.  This showed that “Benza Guru Drubtop” has already viewed all wealth as nothing, with no desire or wish for anything.

The author once requested one of the abbots of the monastery, Jamyang Dorje Rinpoche, to make some money offerings, but was instead met with laughter from Rinpoche who said, ‘“Benza Guru Drubtop” does not want money, how to make offerings to him? If you want to give him clothings or other things, he may not accept, or he may just bless them and return them to you. if you want to offer food, he is now provided food by the monastery, so he may not enjoy what you offer him.  Apart from his meals, he doesn’t really accept any other food.’  Hearing this, the author felt deeply that this siddha master was truly without needs or wants and was worthy of respect and veneration.

Seven days before he demonstrated impermanence, the “Benza Guru Drubtop” informed the abbot Urgyen Lama,”I am going to leave this world to go and see Padmasambhava.”  At that time, the abbot felt that Drubtop was still healthy and thought that he was merely joking.  He did not pay much attention to this remark.  “Benza Guru Drubtop” then confidently told several monk friends that, “Urgyen Lama does not have freedom over birth and death, but I do.  He will not understand my meaning…  the dharmakaya is beyond death, because I have realised the dharmakaya, there is really no death to speak of for me!” Totally unschooled and who had not studied any dharma teachings, sutras or commentaries, yet, “Benza Guru Drubtop” was able to make many such statements that utilised the expressions of the Dzogpa Chenpo realizations.

With nothing special happening, apart from those monk-friends who knew about it being worried that “Benza Guru Drubtop” would manifest death, others did not feel that the Drubtop would really be able to predict his own time of death, and be able to leave this world with such ease and freedom.  Seven days later, in the clear gentle light of dawn, “Benza Guru Drubtop” sat in crossed-vajra posture and imperturbably released his intent into the dharmadhatu.  At that moment, a gentle tremor in the earth could be felt. 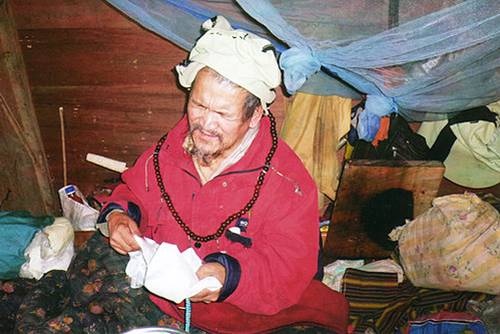 After his parinirvana, the usually-deserted monastery was thronged by more than 3000 people trying to pay their respects.  After he passed away, everyday at dawn, there were three birds flying in to circumambulate his body three rounds before flying off.  These were said to be dakinis paying their respect.

“Benza Guru Drubtop” passed away exactly 7 years from when he received the vision from Padmasambhava, thus fulfilling the prophecy that he would “recover his sight”.  Because now, he would have no body to obstruct him from going to the Sangdok Palri Pureland to see Guru Rinpoche.

The author wishes that this extraordinary account of a recent Guru Rinpoche siddha would encourage all sentient beings to give rise to faith and supplicate Guru Rinpoche, ultimately attaining the same state as him.

(Colophon:  As the English translator was himself inspired by this account of the Vajra Guru Siddha, he decided to render it into English so that it would be accessible to more people.  It is his sincere request that if there are those who have read this account and felt that it benefited them, to please circulate it to others and do a recitation of a 100,000 of the Vajra Guru mantra for the benefit of all beings.  By this translation, may more people come to know the benefits of reciting the Vajra Guru mantra, do its practice and quickly attain realization.)

Guru Rinpoche is the most important practice for Nyingmas. Many simple uneducated people have achieved realization from the recitation of Guru Rinpoche mantra – with no other form of practice. Many ordinary people have died without anyone thinking that they were practitioners — who were then found to have entered into thug-dam after death (a type of meditation where the heart stays warm after death).

If you were inspired by this account, and wanted to do the Vajra Guru mantra, then it is important to first either receive the teachings, transmissions, or empowerments from a lineage master for this particular mantra.

If you wanted to receive these things in way of video call or in-person from Lama Jigme Rinpoche and the Padma Rigdzin Ling Buddhist Temple, then please contact us.