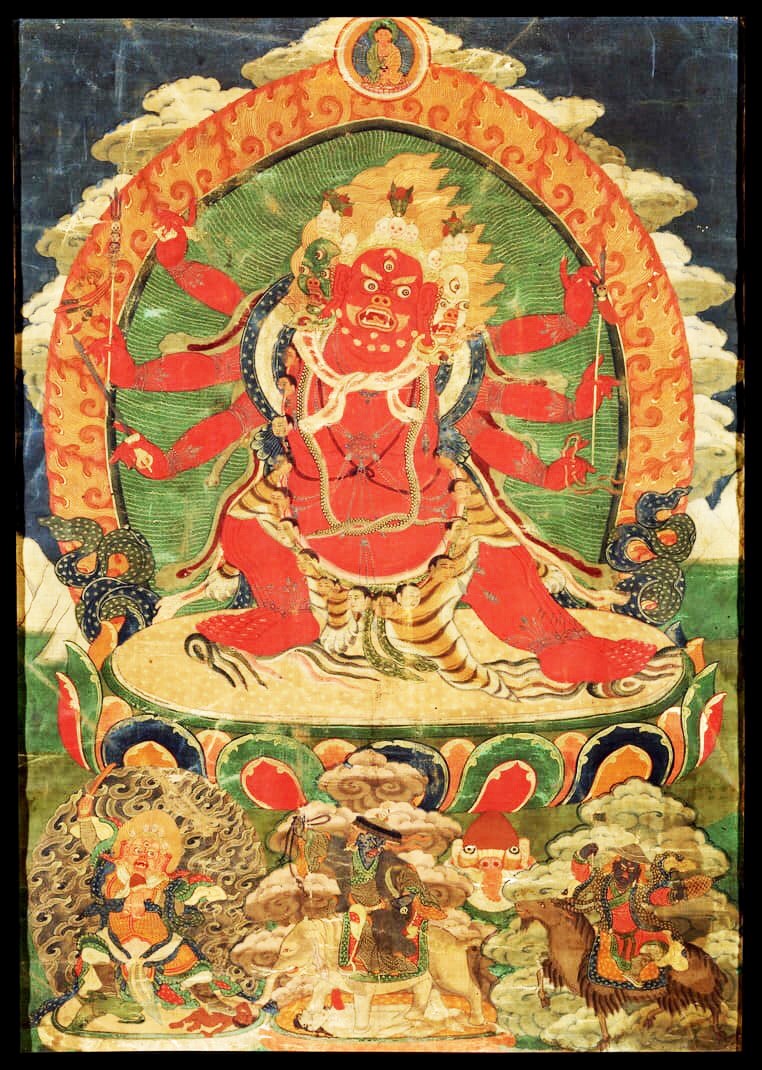 A Brief Explanation of Hayagriva

by the Ven. Lama Jigme Rinpoche

Here is the brief introduction to the development stages of the supreme secret emanation of Hayagriva, who emanates from the noble and great compassionate one Avalokiteshvara. As Hayagriva offers help, his body reflects a radiant brilliance. Hayagriva’s three heads represent the three doors: Body, Speech and Mind. By completing the entire six perfections (Paramitas), the six armed one subdues the suffering of the six causes (the six realms of Samsara). Hayagriva has three faces: a green face on the right who is smiling greatly, a white face on the left who is showing extreme covetousness, and a red face in the center. Each of Hayagriva’s faces comprise of three eyes, each seeing the three times (past, present, and future). All of his eyes are round and opened widely with wrathful energy. His mouth is opened with four fangs, which destroy the four evils (Maras).

On each of his head’s Hayagriva has a horse head, dark green color with wrathful and odd works (which symbolizes that Hayagriva is the Smith of the gods, a jack of all trades). Each horse also has a peaceful white snout, expanded with yellow cartilage. The horse’s manes are red symbolizing that it is there to give help; neighing with opened mouth, it conquers the three realms and terrifies evil spirits. A sparking of fire comes from each mane that fills with a firewall from the realm of Brahma all the way down to the Universal base of our Earth. (The mythological basis of our known world. It is made of gold and is situated below Mt. Sumeru).

Of the Hayagriva’s six arms, the first on the right carries a vajra, symbolizing the five primordial wisdoms. The second arm has a trident, bearing three heads, symbolizing great bliss. The third arm is holding a vajra sword, symbolizing the 8 Mahasiddhas. The first hand on the left has the index finger pointing towards the maras and evil forces. The second hand has a short spear that pierces through perverted views; the third hand holds a noose of human intestines, bound together into space.

Hayagriva wears three protecting clothes: a fresh elephant hide, a human skin as a place to sit, and a tiger skin as a cassock (a monk’s lower part robe). Hayagriva’s three smeared substances are: a drop of blood, smearing grease, and a heap of human ashes. Hayagriva has two fastened ornaments that adorn his eight charnel ground attire, they are made of sacred thread (Brahmin thread) that is made from human hair and are ornamented with bones. The six perfections (Paramitas) are symbolized by: bracelets for generosity, a girdle for morality, an ear ornament for patience, a necklace for diligence, a crown for contemplation, and an offering scarf for knowledge.

The five organs are the eyes, tongue, ears, nose and the heart. The purpose of practicing the development stage is to refute the appearance and conception of ordinariness and to also teach clear manifestation to disprove appearance and have pride when you dispute conception. Clear Manifestation is the aspect of the deity to be attained by holding to the mind. Unfettered by appearance, fettered by conception. “Cut down the conception!” The Great Master Naropa so said.

The meaning of Hayagriva’s mantra:

‘Om‘ is the Vajra Peak Tantra; it is most supreme, it is filled with wealth, treasure, auspiciousness, and prosperity. It is endowed with the aspect of fortune, promise, success, and it is the essence of holding a precious gem. ‘Hrih‘ is Hayagriva’s own seed syllable put at the beginning of the mantra for invocation. Wisdom is also the syllable of ‘Hrih‘, which is the heart of Buddhahood. ‘Pema Than‘ is the “eliminating lotus”. ‘Benza Trohdha‘ is the wrathful Vajra. ‘Hooloo Hooloo‘ means strive, strive! ‘Hung‘ is the great bliss from the nature of the five wisdoms, in which the vowel U is demonstrated by the completeness of those five wisdoms. ‘Phet‘ means to cut down or to break. The mental construction of perceiving attributes in accordance with time and purpose, so the act of cutting or breaking is attached to this mantra. In order to explain the meaning precisely, you have to cut down all the unfavorable conditions of mental construction in order to perceive the attributes of the five wisdoms. Through using the Wrathful Vajra Hayagriva’s eliminating lotus ‘Pema Than‘, you can attain the union of bliss and emptiness in body, speech, and mind. By meditating accordingly (Samadhi) on the development stage of Hayagriva and by diligently reciting his mantra, no evil spirits of the three realms will be able to harm you. The blessings of Hayagriva will enter your heart and you will immediately attain all the supreme and common siddhis.

It is very fortunate to have diligence as a Yogi, as the all-knowing Gendun Gyatso (the 2nd Dalai Lama) says:

Perfecting the recitation of wrathful,
Following steadily the development stage,
Subduing all the obstacles of the three realms,
Such fortune does this Yogi have.

Alas, you the powerful deity. Your fame spreads like summer thunder. Wherever the water of mantra flows with purity, chase simultaneously all the evils with your weapon.

The empowerment of Hayagriva (Tamdin in Tibetan) was first given to the Ven. Lama Jigme Rinpoche by his masters: Rigdzin Jigme and Aku Sherab in Tibet. Later, it was again given to him again by H.H. the Dalai Lama in Dharmashala, India due to the political and spiritual situation of their land. While giving this empowerment, H.H. the Dalai Lama gave an in-depth explanation about the Dharma Protectors and their history, specifically clarifying that Shugden is not one of them.

Hayagriva is an extraordinary deity, not only of the past, but of modern times; he carries extraordinary powers which help avoid smaller difficulties caused by ghosts, or bigger issues caused by King spirits, Naga spirits, Gong Spirits, etc.

Due to the development in science and technology, humans continue to pollute the environment with chemicals and exploit natural resources through mining, deforestation and the development of land; this in term results in new and existing diseases.

For a long time, Tibetans avoided major excavation or even the removal of stones (big or small), or the abuse of natural resources. It is believed that there are spirits living in these areas which can be disturbed and bring numerous difficulties and illnesses to the world. Hayagriva is the deity that can subdue all these troubles.

This was written to Tibet’s spiritual leader; His Holiness the Dalai Lama. Master Yogi Lama Jigme Namgyal wrote this at the Padma Rigdzin Ling Temple in the northern Indian regions of Dharmashala, a beautiful place among the wilderness filled with melodious sounds of various birds.

The Wealth and Happiness of this life is the continuity of suffering in the future.

If happiness and suffering need to be equalized, ask a qualified and genuine teacher.

If you were interested in receiving teachings, transmissions, or empowerments, or if you had any questions on the practice of Hayagriva, then please contact us. Available by video call or in person.